Each of these types are designed and manufactured for specific applications, which are briefly described below.

A single-girder ZARRIN MEHR roof crane is an efficient and effective equipment for handling materials up to 16 tons. This type of crane can reach up to 39 meters, even in halls with a lower ceiling height. With a minimum safety distance between the upper flange of the crane and the factory ceiling . the compact dimensions of ZARRIN MEHR cranes makes it possible to take full advantage of the available heights and save the cost of building a new building.
The single-girder ZARRIN MEHR roof crane range includes a variety of side fittings for compatibility and versatility with existing space and dimensions. The compact design of these sections allows the user to exploit the highest position of the hook. For new buildings, the 3rd version is the ideal solution, which offers the smallest secured clearance and the most access to the hook. In addition, the range of ZARRIN MEHR cranes includes a variety of accessories for various applications.

Does the ceiling of the factory or workshop allow you to use a usual single girder overhead crane? Do not worry. 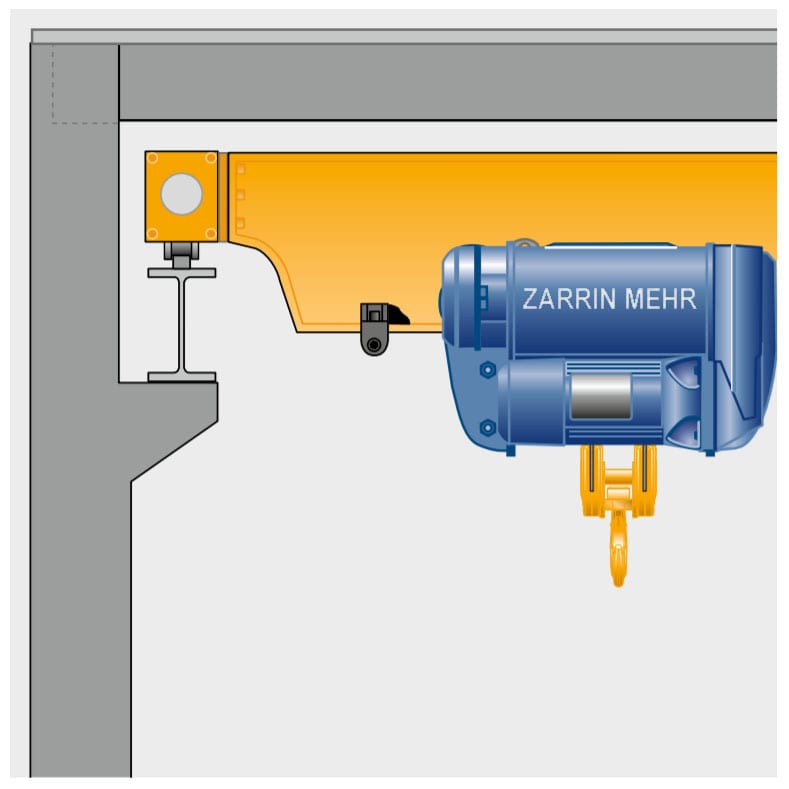 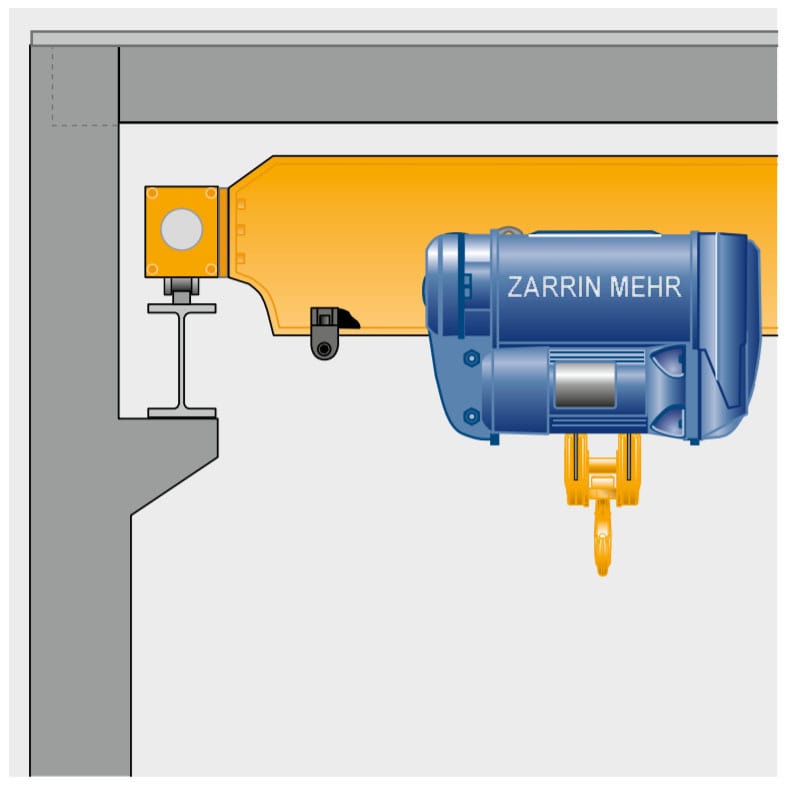 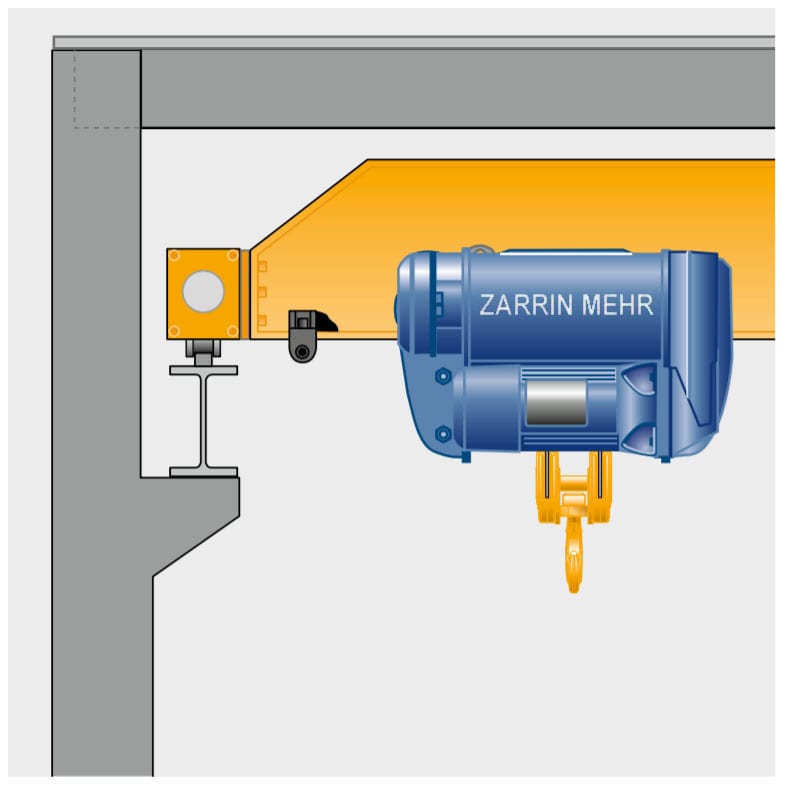 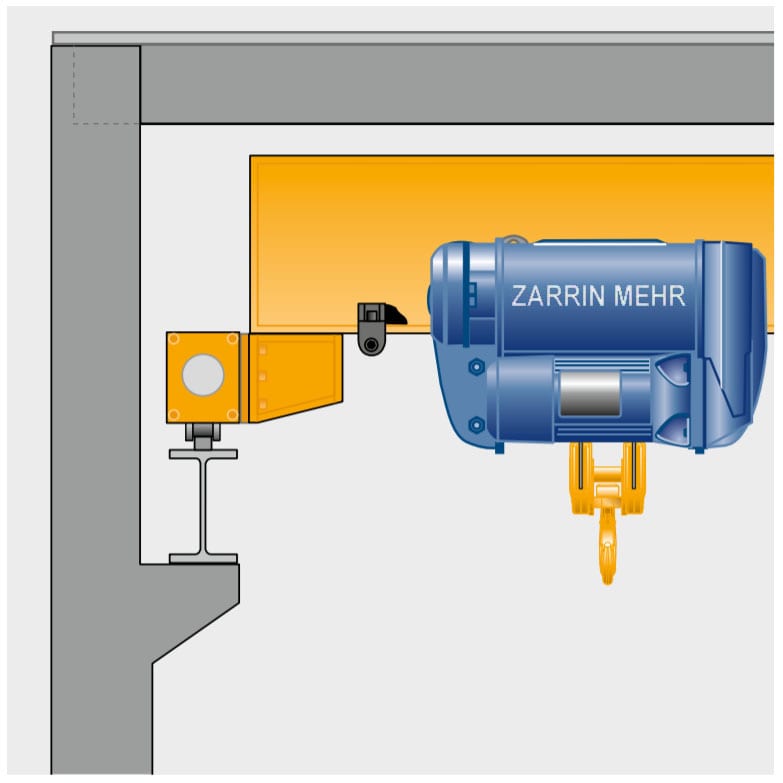 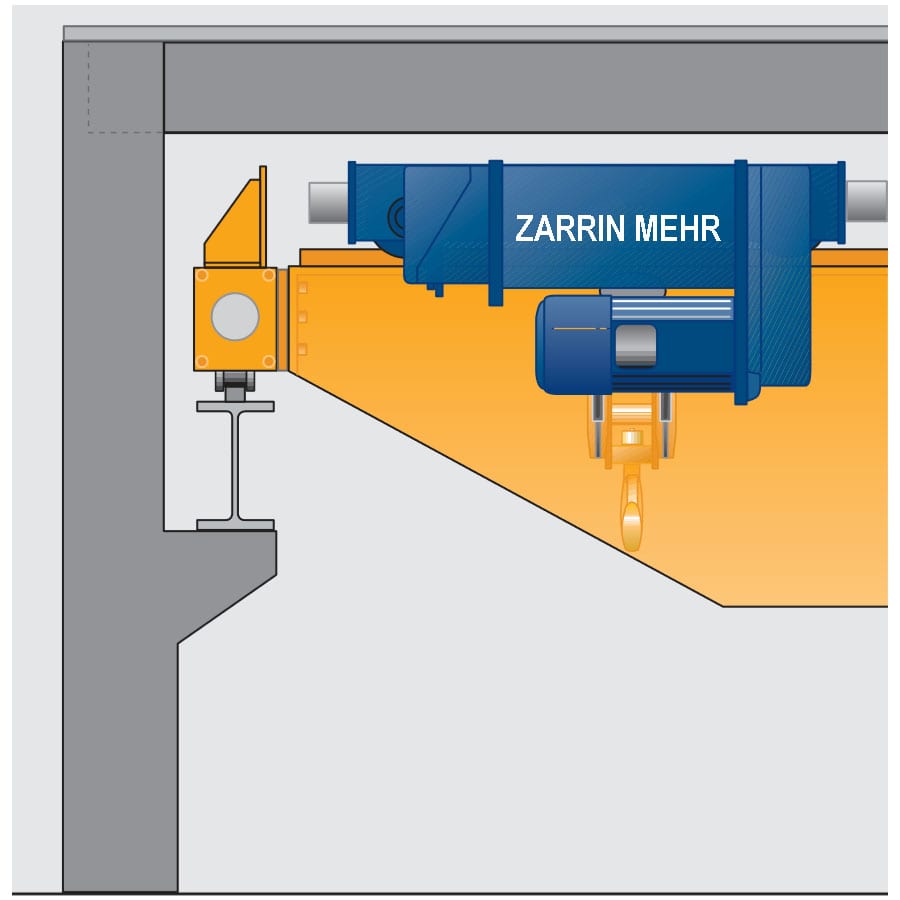 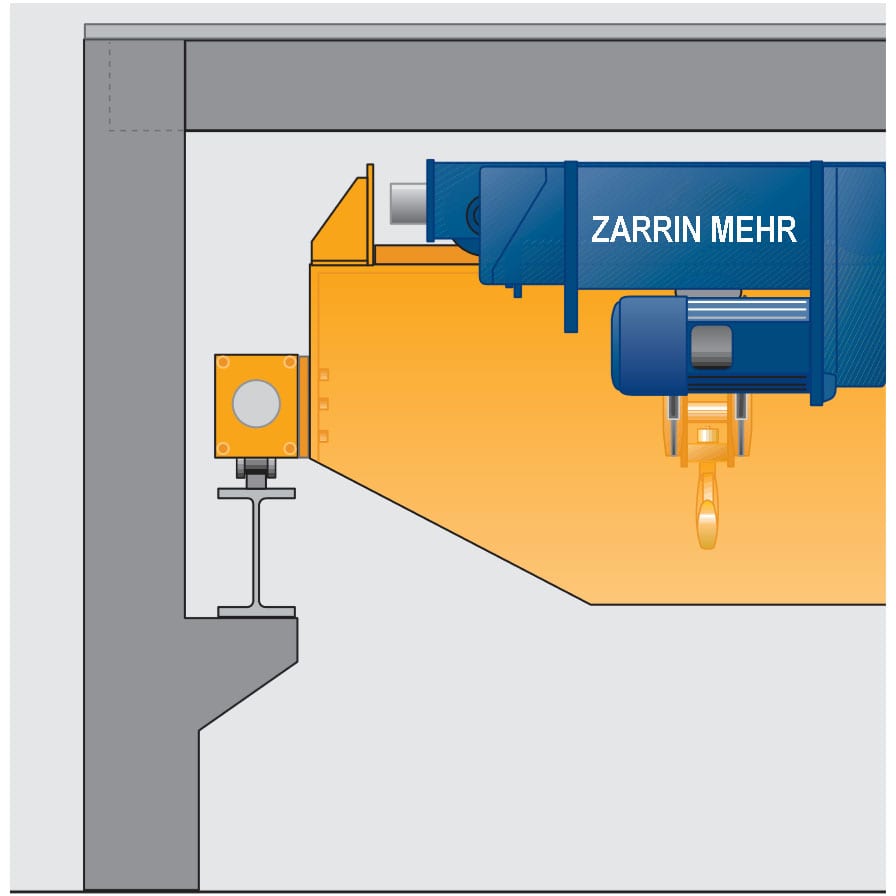 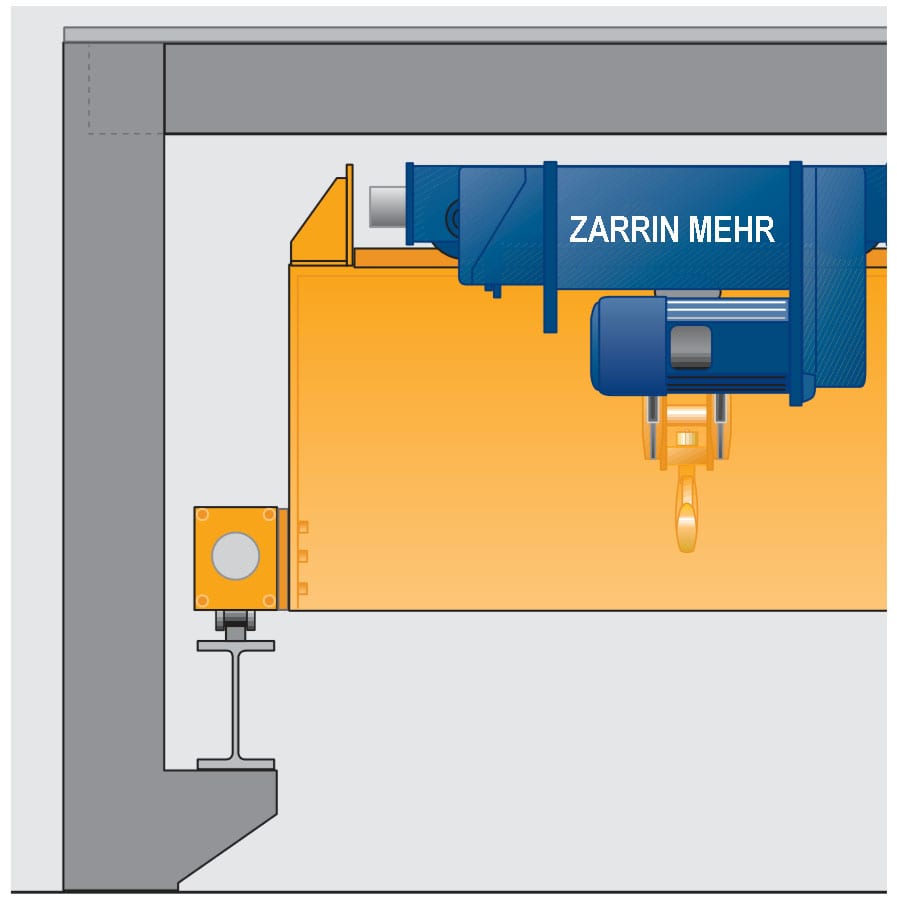 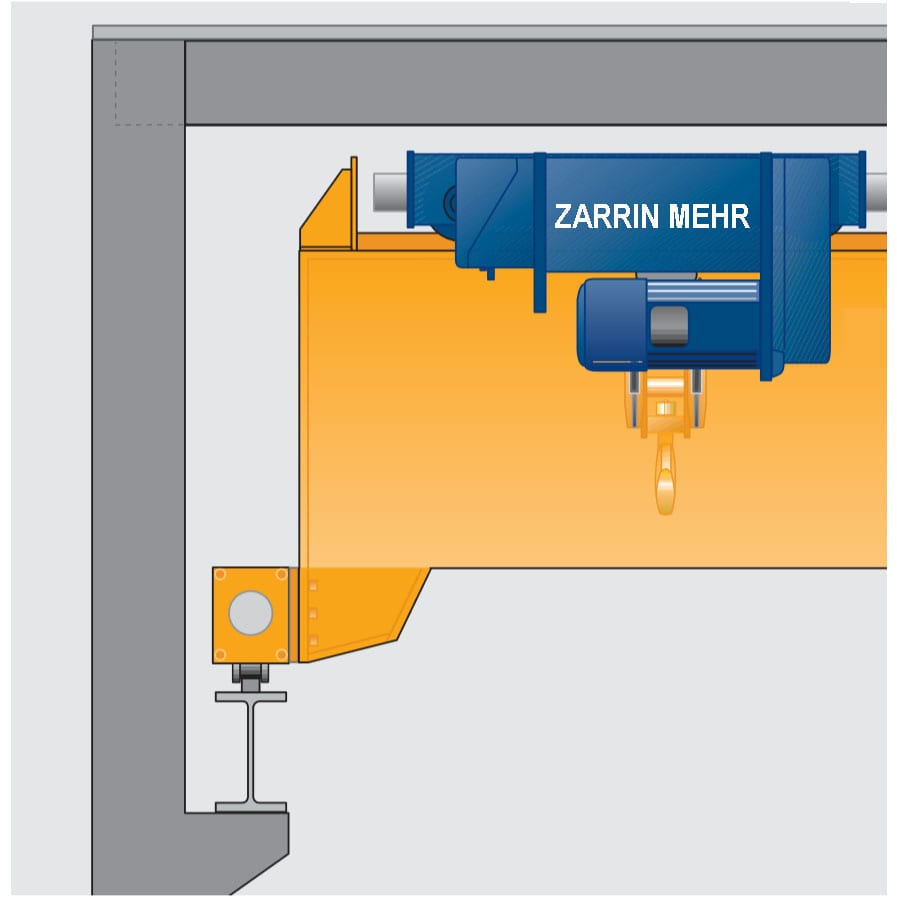 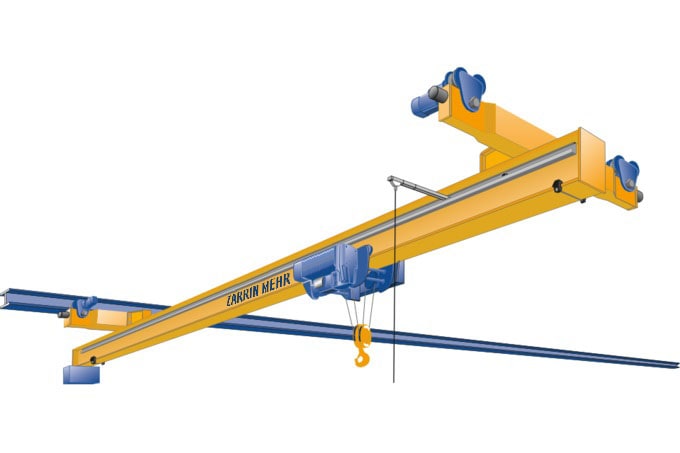 The complex conditions of the building require specialized solutions, which can easily be used with single bridges of ZARRIN MEHR pendant cranes. In these situations, instead of using pillars and separate beam piers, the guides (hinges) move under the beam of roofs. Therefore, the best possible results are achieved even in tight spaces and difficult situations.
The single girder ZARRIN MEHR pendant overhead cranes, with the definition of small dimensions, the custom fittings of the main beam (bridge crane) and the most access to the hook, make the most effective use of the width of the building. It is also possible to optimize the highest position of the hook by installing the crane bridge between the two end-carriage .
The single bridges ZARRIN MEHR under running overhead cranes are usually available up to 8 tons and 25 meters spans, although it is possible to design and construct this type of crane to the openings and unlimited capacity in ZARRIN MEHR Crane Engineering Company. The main bridge Some of these under running overhead cranes are made of rolled profile section, while in other design versions, a twist-resistant box is used by engineers at ZARRIN MEHR Co. and it is produced under the supervision of experienced technicians . In all design versions, there is a comprehensive program for supplying accessories and spare parts for ZARRIN MEHR cranes.

Does the ceiling of the factory or workshop allow you to use usual under running overhead cranes? Do not worry. 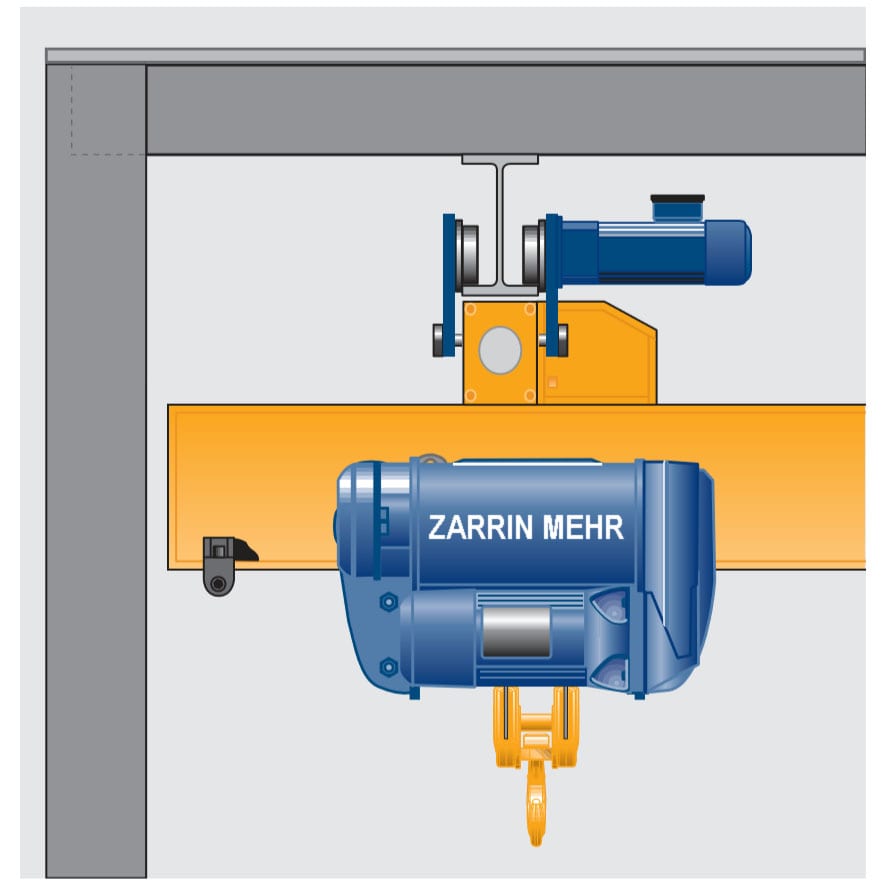 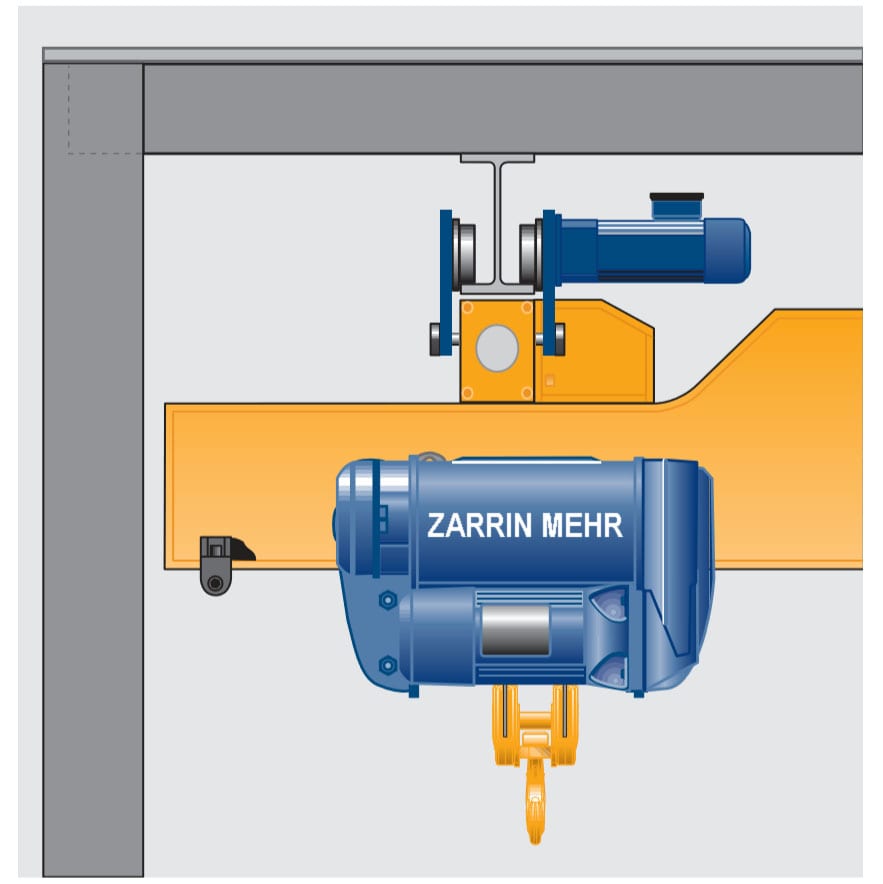 The ZARRIN MEHR wall travelling cranes move on a separate path and at a lower level than the level of the overhead cranes. These conditions allow you to shift loads in separate production areas and carry out displacements independently of larger roof cranes. ZARRIN MEHR single girder wall travelling Cranes are designed for a capacity of 5 tons and up to 12 meters. 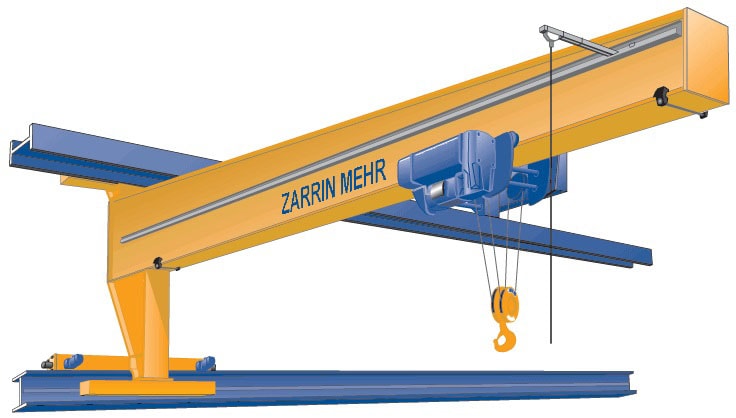 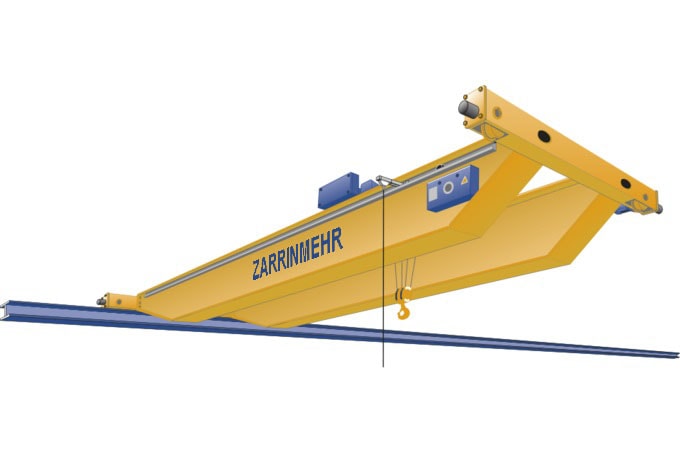 Double is more powerful ! If you need to carry heavy loads up to 120 tons across a wide area, the double girder overhead crane of ZARRIN MEHR is your best choice. Like ZARRIN MEHR gantry cranes, ZARRIN MEHR overhead cranes are compatible with both old and new construction, thanks to the various versions of connection between girders & end-carriage . The double girder overhead cranes of ZARRIN MEHR guarantee continuous operation, flexibility and ease of use.
In addition, accessories and spare parts of ZARRIN MEHR can provide specialized equipment for specific applications. ZARRIN MEHR Double Girder Overhead cranes have welded boxes with main beams (crane bridges). To achieve high performance, low weight and benefits such as increasing endurance and reducing the cost of payments , all bridges sections (bridges, end-carriage,… ) are optimized with  computers using FEM methods .
ZARRIN MEHR double girder overhead cranes are available with a span of up to 40 meters. They can be designed and manufactured to the unlimited capacity and openings at the factory of ZARRIN MEHR Crane Engineering Co., and are flexible for specific requirements and unusual requirements. For example, faster speeds, maintenance platforms, carriages and elevators with utility corridors and elevators are all features that can be easily implemented.

Does the ceiling of the factory or workshop allow you to use usual double girder overhead cranes? Do not worry. 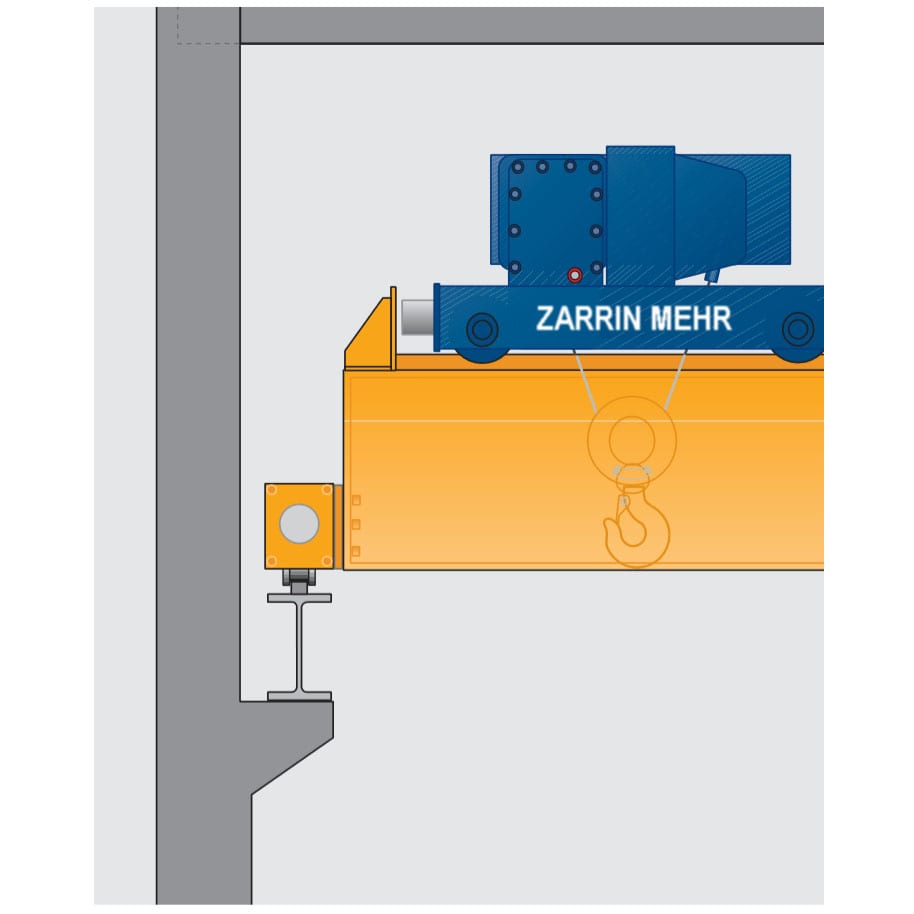 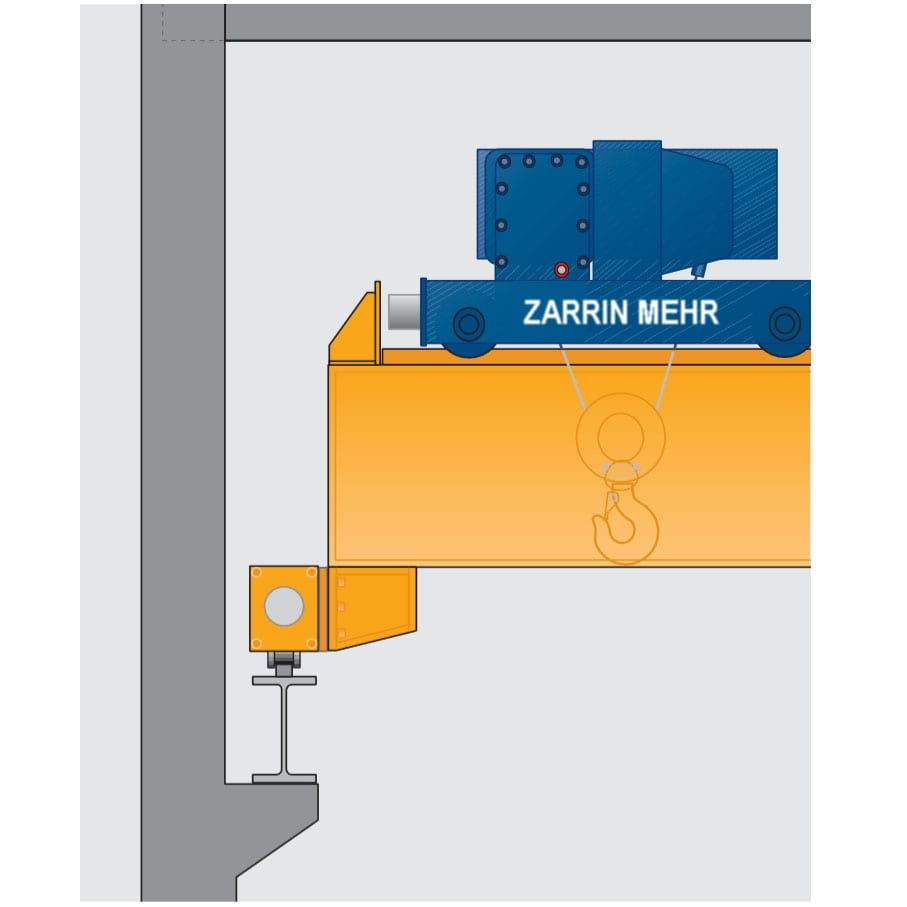 Do you plan to buy a overhead crane? 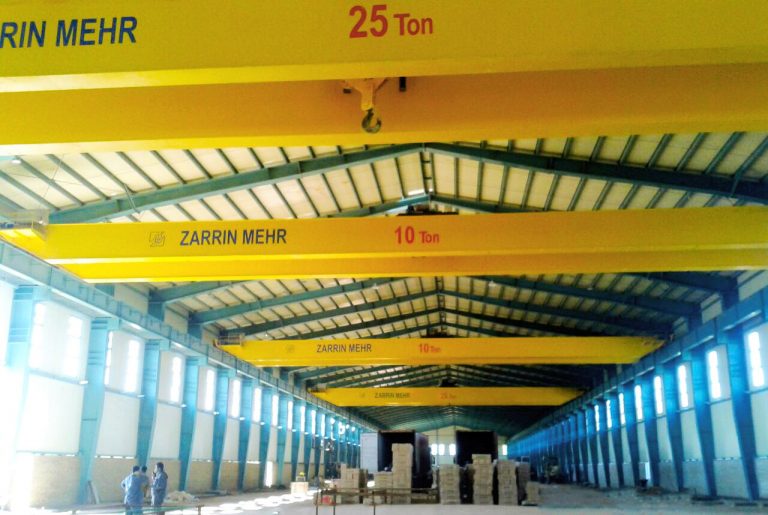